There are a number of factors to look for when you're buying a suit - especially if it's for the first time. A high quality suit doesn't just mean it's made with an expensive fabric - other details like how the suit is cut, the way the buttons are sewn on, the overall fit - all contribute to the overall quality of the finished garment. In this series, we will go through each of the different factors so that you are well prepared the next time you're out purchasing a new suit.  One of the most important characteristics of a good suit (and one that matters the most to our customers) is the quality of the wool. A lot of people think that the higher the Super number of the suit, the better it is – and let's just say that's only a half-truth.

Most suits are made from worsted wool, which is basically a manufacturing process that separates the long strong fibres from a bundle of wool and spins them into yarn.

When you see suit tags that say Super 100’s or Super 180’s, the number represents the number of times the worsted wool has been twisted. Generally, the higher the number, the finer and lighter the cloth will be. The higher Super count will also mean that it has a smoother texture and appear more luxurious. This however, doesn’t mean that a Super 80’s suit is just a piece of rubbish. The lower the S number, the “sturdier” the cloth. It is generally heavier (but also warmer) and the texture is a bit coarser.

There’s no doubt that a Super 180’s wool will feel better on the body, however, because it is much finer, it also doesn’t have as much wear, will be more prone to wrinkling, may drape over the body and will be harder to clean. A Super 180s suit may need greater care in maintaining the suit over time and is why most people reserve such suits for special occasions.

A Super 100’s suit, whilst not as fine or smooth as a Super 180’s suit, has greater durability and is much more practical for everyday wear. This should also be considered if you are likely to be in a suit for big Friday nights as snags in finer fabrics happen much more frequently and can be very difficult to re-weave or fix.

Generally speaking, it's best to not be overly caught up about the Super numbers. Very good quality suits can be created using wool in the Super 100s to Super 150s range. A well-tailored wool suit, cut to the individual's body will look great in fabric of almost any fineness. Conversely, a super fine, branded Super 180s suit may look horrible if it's poorly cut and just does not fit the wearer's body.

Take a look at our infographic below which gives you the low-down on worsted wool and next time, instead of just buying a suit because it’s seen to be the better and more expensive option, make sure you base your decision on what you need your suit for and go from there! 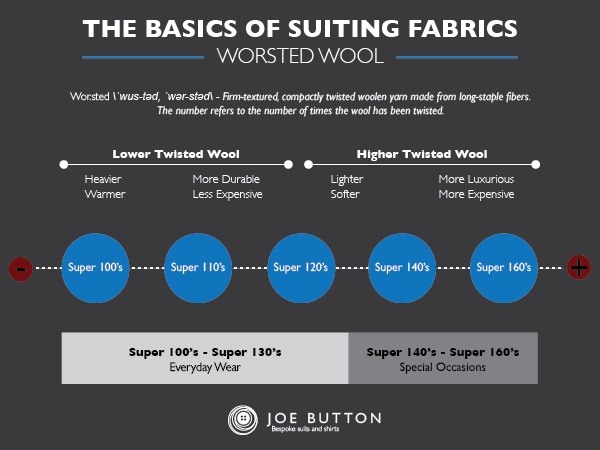 If you're in Sydney or Melbourne, you can now book an appointment to come into our showroom, take a look at our fabrics and get fitted for a custom tailored suit. In our next post, we'll be going into part 2 of How To Buy a Good Suit - the construction of the suit.